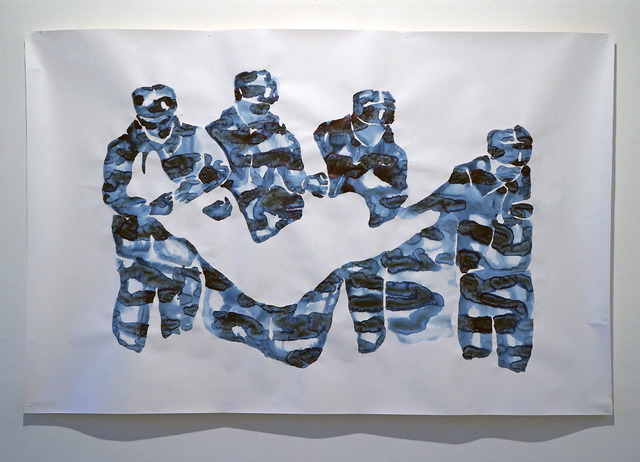 These are paintings of collective bodies. As Walter Benjamin remarked somewhere, “the collective has a body too.”  But we are used to thinking about bodies as individual, as “mine.” These paintings ask: how can we see and think about collective bodies, the body experienced not as “mine” but as “ours” (or perhaps “theirs”)? In these paintings, the groups of bodies come together in emotionally resonant and powerful forms. They are emotionally resonant first of all because they suggest forms of duress - such as being lined up against the wall by the police — or institutionalized gathering, whether it is prayer or protest or the police in the act of arresting someone. But these collective bodies are also organized by suggestive shapes — triangles, lines, circles. (In a distant way, they may recall Matisse’s paintings of dancers. Or in another vein, Jackson Pollocks drip paintings, which are organized by a certain swooping gestures and shapes, so that the most miniscule of individual drips manages to come together into an overall organization.). The viewer sees an easily perceivable shape, which is given further coherence by the artist’s use of color: the bodies are seen a single unit, with an overarching logic, like a “mood” or “spirit” that gathers them together. But then, upon further examination, one notices that on the local level, the paint is splotchy, like camouflage.  This suggests that perhaps these groups are trying to “blend in” or hide, like an army in enemy territory. Or, perhaps these bodies are brought together by a form of mimicry (since that is what camouflage is): the single bodies make a collective by trying to blend in with one another.  (Although it is quite different, I think also of Warhol’s use of camouflage, and especially his camouflage Last Supper paintings.). They wish to become indistinguishable from one another, to form a single (more powerful? pleasurable?) body. The way that shapes blend and bleed from one body to the next suggests the forces that orchestrate the bodies together, that the bodies are in fact, in important ways inseparable from one another, joined together by multiple forces, blobs and shards of feeling, affection, fear. In these varied but similar shapes, moving with and across bodies, the artist has represented the forces animating the collective body. (TEXT: Jonathan Flatley)