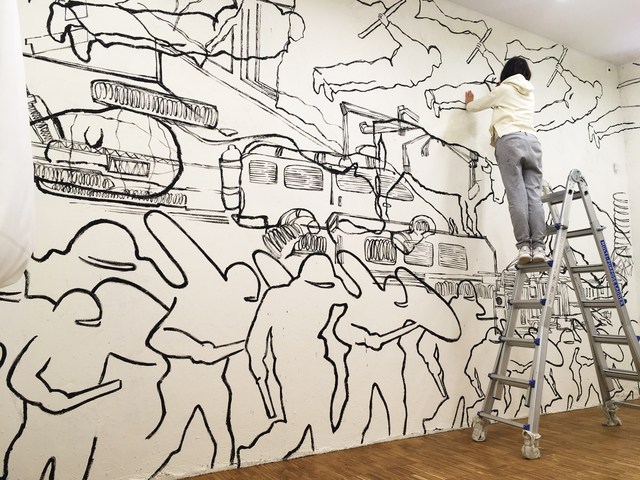 Individual and collective memory in Ekaterina Muromtseva’s poetically conceptual projects serves as the subject of marking and obscuring, of the scale and proportion game, interpenetration and interference. The artist combines documentation and artistic imagination: unreliable memories bother the drowsing past and allow multiple paradoxes to spring.

The video In this Country (2017) is organized like a shadow show, an animated dream driftage by the means of which Muromtseva highlights and deconstructs the elements of historical memory. The narrative is based on present-day school compositions written by sixth-eighth-graders who were asked to discuss the life in the USSR. The innocent and full of exaggerating statements about the reality of the Soviet Union lied over recognizable signs of the time, familiar archetypes and easy to read symbols bring to the forefront the frame of post-Soviet mythology with incrustation of politics of memory pursued over the past decades, untreated traumas and domestic anecdotalism. The layering of frail memories is represented through human bodies – depiction of their evanescent shadows as well as complicated and ephemeral dynamics of their interaction.

In the broad-scale aquarelles of the series More then Us (2017) the artist emphasizes the entwinement of translucid figures, the creation of the integrated spotted ornament, the light-and-dark rhythm of the collective body. Faceless characters merge into each other, interfuse with the background and take the form of geometric figures, demonstrating plurality of powers responsible for such assemblages (presentative, affective, institutional).

In the painted illuminated installation Quarter to twelve (2018) the cortege of overlap protesters, Special Police Force officers, machines and animals constantly rotate, moving in accord with a kind of social rhythm, “the music of revolution”, embodied in meditative whispering of Alexandr Blok’s poem The Twelve. The figures inserted into historical, contemporary and futuristic narratives move along the walls like in pre-cinema cycloramas, alluding, on the one hand, to cyclic reproduction of patterns of violence and suppression, on the other hand, to unbroken and eternally renewable hope for future changes.