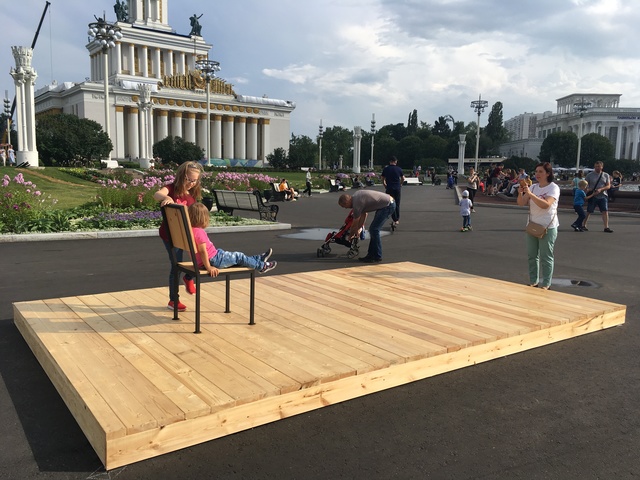 “The Spectator's Theatre” is a series of interactive facilities — theatrical auditoriums with different arrangements at VDNkH (The Exhibition of Achievements of National Economy) enabling spectators to become actors and conduct experiments both on themselves and the surrounding world. The project argues that hierarchy is not the best way to organise social order and invites viewers to try and “rehearse” a diversity of orders, to experience the horizontal social structure and the freedom of choice. For these purposes, a theatre prototype is organically suitable offering a play-like laboratory space, which shatters established patterns of behaviour and provides a viewer with an opportunity to do something extraordinary, to play a role, to become a creator.

The objects are open to verbal and kinesthetic interaction inviting viewers to try different roles (though not imposing them), e.g. a role of contemporary Hamlet contemplating our time, a role of a free individual personality taking an independent decision to take part in the proposed action, a role of a creator building his / her own artistic world. The seriality of objects implies a structure of a travel, a comparison, a discovery. The location and arrangement of each separate object creates opportunities for building an individual plot and individual way of interaction with it. In parallel, the project tells about the modern theatre, its diversity, its capabilities and the fact that the theatre today is a powerful, relevant tool for transforming reality.