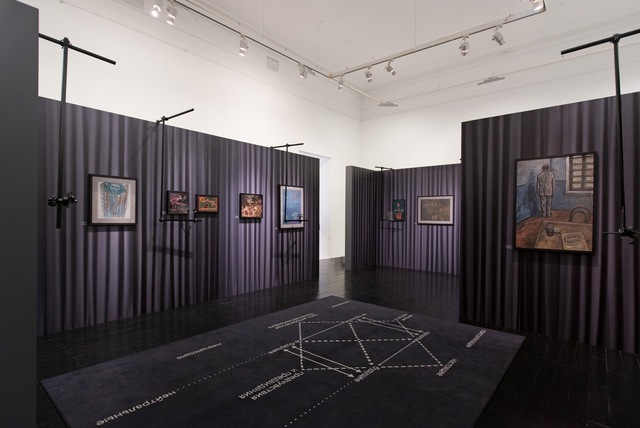 This study of exhibits from the collection of the Moscow Museum of Modern Art was carried out by the Agency of Singular Investigations together with the Centre for the Study of Secret History (CSSH). For the discovery of ‘Refined Aesthetic Properties’ (RAP) of Art Objects (AO) a Large Experimental Installation (LEI) has been constructed. Forty works by 20th century Russian artists were also chosen. These AO possess RAP, which have the ability, bypassing the conscious mind of a viewer or artist, to transmit in a hidden manner collective emotions and sensations. RAP can be seen in special ‘Manifestation Effects’ (ME), which can be observed with the aid of Observational Devices (OD). Such signals tell a tale of forces, which struggle to express themselves in the visual atmosphere of this era, and of that which, like dark matter, imperceptibly fills the breaks in the ‘joints of time’. The principle according to which LEI functions is explained by the Main Diagram (MD) on the Orientation Carpet (OC). The four Wall-Theatre-Wings (W-T-W) are oriented in accordance with MD, which describes the interrelationship between the four main Levels of Temporal Intensity (LTI): ‘present’, ‘premonitions and prophesies’, ‘post-historical psychoseismographies’ and ‘eternal questions’. A similar principle was used during the placement of the AO. ME can be observed with the aid of OD, placed next to the relevant AO. OD are quite easy to use, they are operated with one of the three main types of look: observant (O), contemplative (C) or foreseeing (F). (Stanislav Shuripa, Anna Titova)