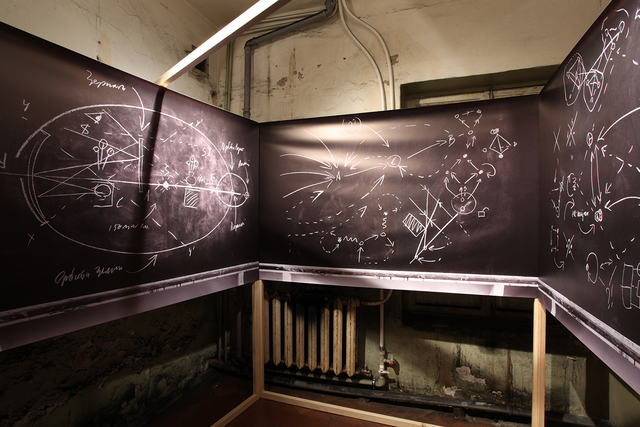 Observatorium is a ‘personal museum’ of an unknown conspiracy theory enthusiast, built inside an abandoned house in the centre of St. Petersburg, where his personal archive had been found. According to documents discovered there, it was possible to reconstruct materials, instruments and other objects connected with the work of this nameless enthusiast of hidden knowledge. The space had retained the traces of various eras and became the means of telling a story about the world of the vanished researcher, a map of the universe where in the most commonplace everyday elements one could spot traces of some super-conspiracy. The figure of the absent observer is located on the border of social spaces, communications and internal experience – that sphere which the documents are unable to express. One can only judge it based on indirect signs, weak signals and vanishing traces. The evidence includes notes, sketches, newspapers full of free advertisements, with which this ‘underground person’ had covered his windows, photographs of street scenes from the 90s, home-made headwear made of foil, which are meant to protect the wearer from harmful emanations and excessive information. The conspiracy theorist’s archive, with its reconstructed objects, methods of observation, interpretations and self-references, transforms the space, making it not just another house-museum, but rather an operational model of a microcosm, a means of understanding the spirit of an era. (Stanislav Shuripa, Anna Titova)