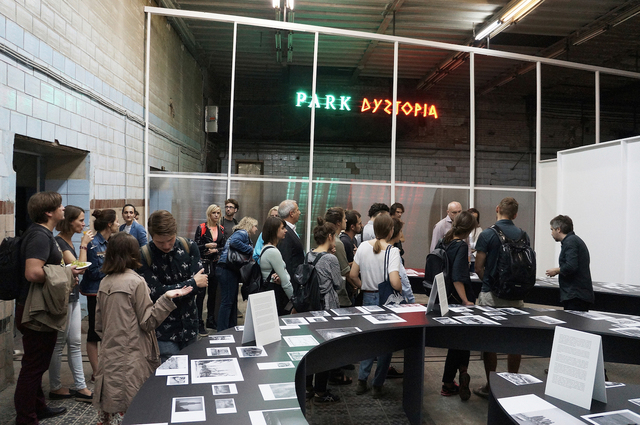 This installation puts one in mind of a labyrinth or a map of a park full of abandoned monuments, where viewers may choose a route to follow, constructing various versions of what they see. The archive of Park Dystopia, unearthed by the Agency of Singular Investigations specialists, tells not only of unknown pages of 20th century history, but also of a catastrophe successfully concealed until the present day. Documents show that in the middle of the 1950s Moscow had been destroyed by a direct meteorite hit that had left a deep crater in place of the city, where various anomalies have since been observed. Astronomers had managed to predict the collision with some accuracy. Within the shortest timeframe an exact copy of Moscow was constructed at a safe distance to the north-east where the capital used to stand. The population had then been transported in an unconscious state. The documents presented throw light on these events from several different perspectives. The photographs show the city environs, every day scenes and the construction of Moscow in the middle and end of the last century, scientific experiments, models of structures in nature and art and illustrations to alchemical treatises. Surfaces on which the exhibits are placed form a spiral construction. The photographic documents are displayed in a table-like manner, as if they are part of a crystal criss-cross of memories hanging in empty darkness. (Stanislav Shuripa, Anna Titova)