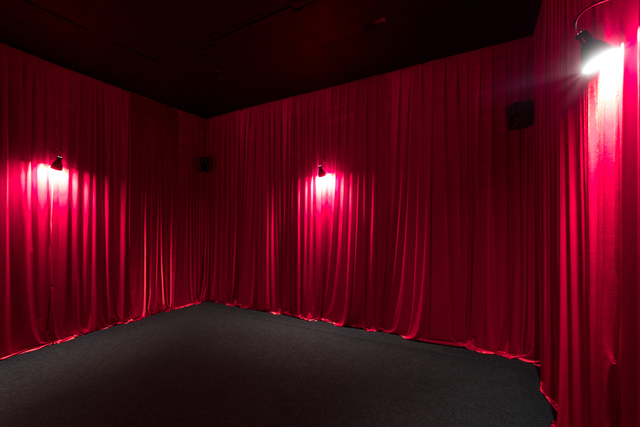 Artificial intelligence, whose very definition is built on comparison to the human and on the human concept of a thinking substance, is at the same time one of the greatest fears of the modern world – the fear of the extinction of the human race. In the public mind, AI is perceived as something integral. Not as a program operating on a given server, but as a program that can be addressed – a program that possesses an integrated identity and an anthropomorphic interface. In reality, the inter face for interaction with the user – the surface of communication – is built separately, while the principle of a self-teaching algorithm is distinct from any interface and may be applied independently of it.

The hotel prayer room is a musing on the theme of a human-like interface, an assumption of the possibility for direct intercourse with an artificial intellect. This small, comfortable room on the ground floor of the hotel invites guests to take part in a conversation on the previous day, on their problems and their fears. A non-existent character acts as their silent interlocutor – in essence nothing but a name, lacking in any other attributes, but possessing its own peculiar model of behaviour.

Using the potential of a software agent, the artist has created a special environment in the prayer room and directs the social situations within. This makes it akin to a temple, whose appearance was also initially conditioned by the necessity for an interface in a potential meeting, and which gradually came to be associated with the necessary attributes – special clothing that denoted the function of the inter face’s admins, and different places for encounters – for prayer, preaching, and the rites of communion and baptism.