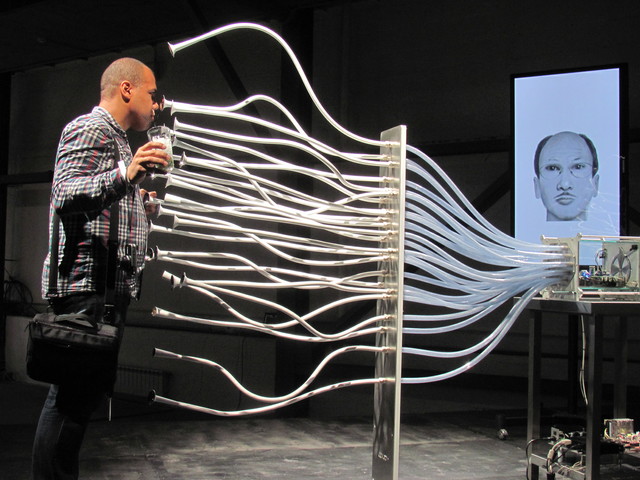 Most people cannot reconstruct smells from memory (it’s rather hard to mentally ‘picture’ a familiar smell, although someone’s face would be pretty easy to visualize). When we try to recall the smell of mint, we end up recalling how mint looks. We can only recognize a smell when experiencing it again. As yet, there exists no mechanism to even approximately reconstruct and reproduce a smell from memory. However, there is a well-established and widely used method of recalling and recreating a visual image: the facial composite, where a previously seen face is reconstructed by comparing and selecting individual facial features. We have decided to use the same method for fixing smells. To do that, we have created an array of gas analyzer sensors that continuously examine the space and the people within their operating range. The data from the gas analyzers constitute a pattern that is unique to this place, this person, and this moment in time – because airflow constantly changes the air composition in the space that is being examined. This unique, ever-changing pattern is visualized in a facial composite. This is how it works: when a person approaches the analyzer, sniffing tubes ‘sniff’ him, then gas analyzers process the information, which then passes to a computer program that translate air composition data into data concerning the shape and position of facial features (the components of a facial composite). As a result, a person sees a face of their smell that is conditional, in no way related to their actual physical appearance. If the same person were to approach the ‘nose’ once again, their portrait would be slightly different (because smell changes constantly), albeit still recognizable. This mechanism is yet another ‘memory crutch’, obviously deficient and ridiculous, and yet exactly in line with the requirements of total visualization that surrounds us today.