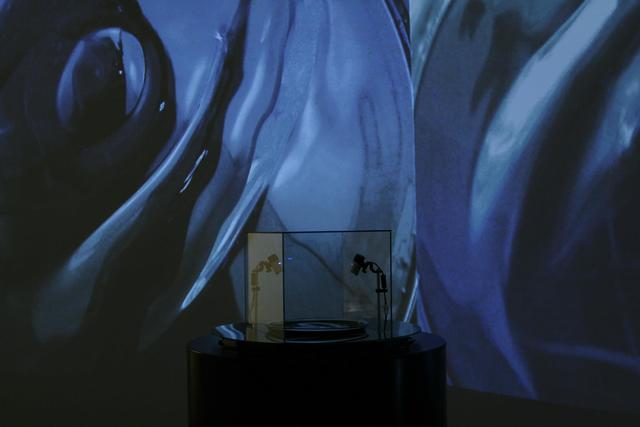 Fields 2.1 is an attempt to create an illusion of consciousness in non-living matter. A moving eye is a property that allows the viewer to perceive the ‘inanimate’ as the ‘conscious’. Using magnetic fields and ferrofluid technologies the artists build up a model of how non-living matter evolves which has an inherent organic characteristic to undergo random specific changes at specific moments of time. In the project consciousness (or its signatures) appears as a reaction to another consciousness (or its signatures) and comprises various relations between matters – from observation to interaction.

The installation is a glass container with a ferrofluid placed on a cylindrical podium. Over this container there are two cameras from which the image is projected onto two screens. A construction assembled from permanent magnets is hidden inside the podium resembling by its appearance an eye. Depending on the degree of magnetization, the angle and the movement of the magnets, different ‘swells’ appear on the surface of the colloid which are similar to an eyeball. When a viewer approaches the installation, (s)he first encounters ‘closed eyelids’. Then the ‘eye’ opens up and starts observing movements of the audience. Scaling of the images with the help of outdoor surveillance cameras becomes an integral part of the installation: the enlarged ‘eyes’ on the screens in their turn monitor the visitors. (Dmitry Bulatov)