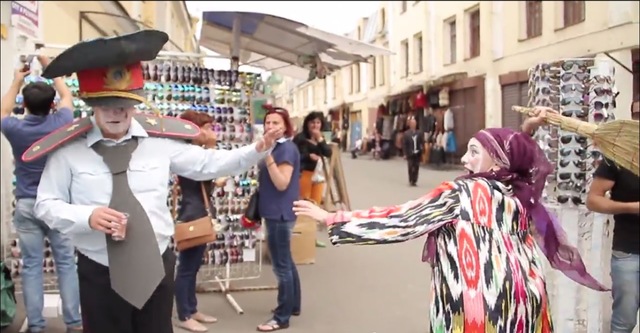 1-year long project made in collaboration with Jon Irigoyen, Anna Tereshkina, and Alena Petite which featured joke contests held weekly for labor migrants and creative workers in Saint Petersburg in 2014. A mobile audio platform was placed on the top of a car that traveled around the city and broadcasted Middle Asian and Caucasian music. Mobile Disco headed from the art space Pushkinskaya 10 along Nevskiy prospect to Apraksin Dvor market where labor migrants had been selling goods since 1990s. The car was accompanied by two clowns (like Pierrot and Arlecchino in Commedia dell’arte) – a migrant woman beating up a policeman with a broom. The entire procession had huge success at the market: it gathered a lot of people around and many of them joined the performance and danced. The tradition of Saint Petersburg raves and open airs was combined with traditional celebrations of Middle Asian and Caucasian countries in a Bakhtinian carnivalesque way.