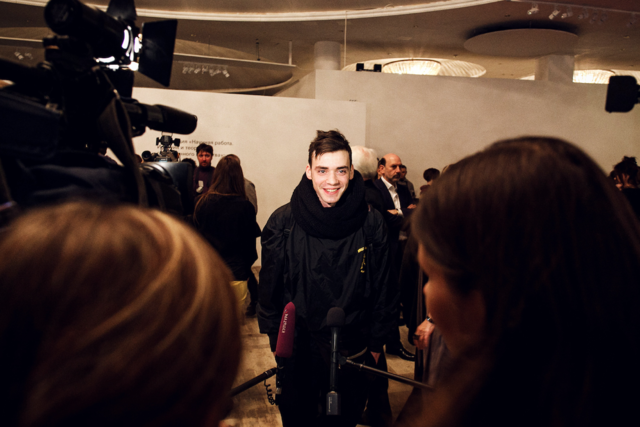 Tima Radya (born 1988) is one of the rare street artists who got his start on the street and managed to develop his own signature style. His first steps in public art were quite straightforward and therefore naïve, like painting a blood-red square on the snow-covered ground to mark the void left by an illegally demolished historic building sacrificed in the process of construction of a glass skyscraper next to it (Red Square, 2011) or a series of ingenuous portraits of WWII Russian soldiers, literally made with fire and then displayed on the walls of an abandoned wartime hospital (Eternal Fire, 2011). Then the artist branched out to provocative pieces centered around intense and controversial, acerbic images, such as a throne-like chair on top of a pyramid of stacked riot shields resembling a house of cards (Figure #1: Stability, 2012) or myriads of banknotes flying out of the Olympic rings (Figure #2: Game, 2014, finalist of the Kandinsky prize in 2014).

Although these pieces can be characterised as performances or actions, they are based on a strong textual message. Thus, Figure #1 and Figure #2 are visual metaphors of the words and phrases in the air (‘stability’, ‘money to the wind’). As poet and journalist Ivan Kozlov has put it, Radya's primary concern is literature and not conceptual gestures. Writing ‘If only I could embrace you, but I'm just a text' (2013) on a rooftop is not so much an attempt to deconstruct the language as to discover and perhaps push its boundaries.

His most recent works are all about playing with text and its direct meaning through interaction with the casual viewer and the mundanity of the surrounding area: Hey You Love Me (2015) at the Zarya Centre for Contemporary Art in Vladivostok; You Crucify Freedom, but the Human Soul Knows No Shackles! (2016) repeating after 40 years the inscription made by Yuli Rybakov and Oleg Volkov in 1976 on the wall of the Peter and Paul Fortress to protest severe restrictions on freedom of expression; Brighter Than Us (2016) – a neon slogan displayed against the night sky next to a scientific observatory in the village of Nizhny Arkhyz. Radya has taken his experiments with text a step further in a special project for the 4th Ural Industrial Biennial of Contemporary Art, where the text 'What Are We? Where Do We Come From? Where Are We Going?‘ – a rhetorical question that the artist left hanging – was placed on the roof of the former building of an industrial plant about to be replaced by a new residential compound. The context is important here, but the text works well enough without it, catching the eyes of passers-by even on the opposite side of the Iset river. Moving away from vivid imagery to meaningful phrases, Radya seems to put the text and the word centre stage, allowing them to regain their positions and lost meanings.