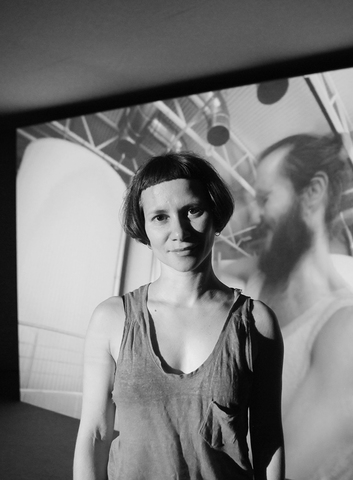 Sasha Pirogova originally trained in theoretical physics, having graduated from the Department of Physics of the Moscow State University in 2010, but decided to become a dancer and from there moved into contemporary visual art. She completed her education at the Rodchenko Moscow School of Photography and Multimedia in 2014.

The video work of Pirogova is not just directed by her, she also writes, choreographs and regularly performs in her creations. Her rigorous investigations result in video works on subjects that are of interest to the artist at a given moment. Pirogova translates existential contemporary issues into a language of relations between humans, objects and their environment. Her videos incorporate dance and acoustic experiments are made using a painstaking approach to process.

The oeuvre of Pirogova is centred around the body and how it interacts with the surrounding world through an endless supply of movements and gestures. The often insignificant or banal gestures that are produced in the interactions provide a constant source of inspiration. Besides the overlooked, seemingly unimportant movements of the body the work of Pirogova is also influenced by our perception of everyday spaces, which tends to be familiar and fleeting, and how we frequently fail to notice details or allow for the possibility of another existence within them.