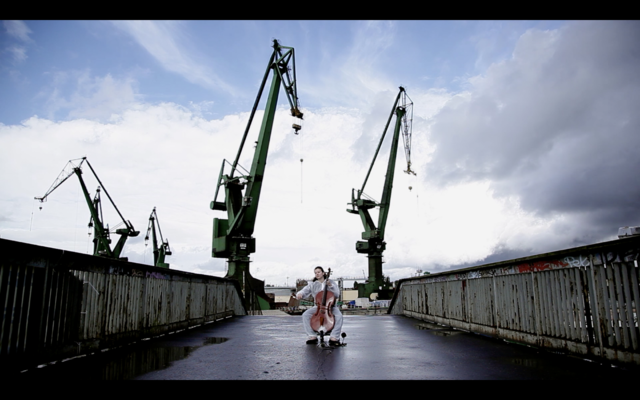 Nowy Port where the video was shot is a neighbourhood of Gdansk (former Danzig), a city marked by two historical events crucial for 20th century history, namely, the first battle of WWII and Solidarity Movement. Nowadays Nowy Port is considered to be a bad neighbourhood in which beautiful old pavements and many buildings seem not to have been repaired since WWII. We have asked the middle-aged and senior inhabitants of the neighbourhood to sing some parts of Walter Benjamin’s essay On the Concept of History.

Walter Benjamin had started to write his renowned text On the Concept of History in 1940 in the internment camp in occupied France short time before he committed suicide out of despair unable to cross French-Spanish border. Combining historical materialism with Jewish Messianic tradition Benjamin speaks of redemption of the past. Looking at the yards, staircases, streets and the canal of Nowy Port, across which on Westerplatte WW II first battles started, as well as at the famous cranes of Gdansk Shipyards, we are trying to grasp, as Benjamin puts it ‘…an irretrievable picture of the past, which threatens to disappear with every present, which does not recognise itself as meant in it’.

The senior inhabitants of Nowy Port who have lived through drastic historical changes sing in an amateur way some fragments of Benjamin’s text accompanied by professional baroque cello player Anna Jankowska. The locals sing the text as a choir and also individually to the tune of La Folia by Arcangelo Corelli, a popular baroque tune, the title of which can be translated as ‘madness’.