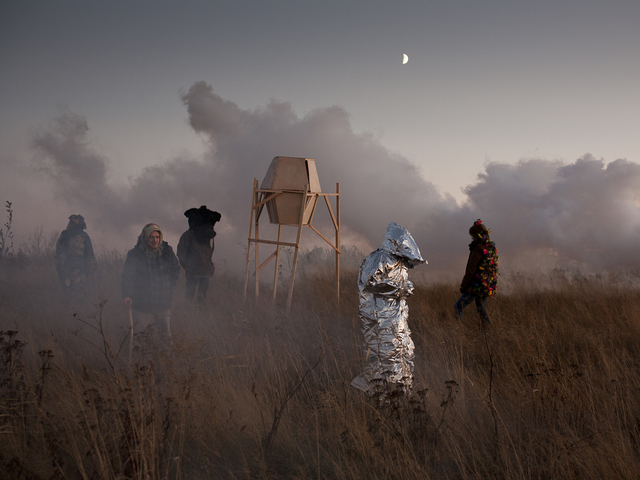 North-7 art group (Alexander Tsikarishvili, Nestor Engelke, Piotr Diakov, Leonid Tskhe, Anna Andrzhievskaya, Oleg Hmelyov, Nestor Kharchenko and friends) was formed in Saint Petersburg in 2013 with graduates of the School for Young Artists of the Saint Petersburg PRO ARTE Foundation for Culture and Arts and their friends, when they rented a basement workshop as a space for creative collaboration and dialogue. Over the past years they have moved from one location to another, lost some members and gained new ones, but seem as passionate and enthusiastic as ever.

In their first public project Towers (2014), presented as part of the Parallel Programme of Manifesta 10, each artist, conscious of the works made by his counterparts, had to produce his own object – a 'tower'. During that time the members of North-7 also participated in a site-specific group show Signal (2014) curated by Peter Belyi and Alexander Terebenin, where they put on display hours of footage of their meetings and discussions on their participation in the show.

These projects have been instrumental in defining what the group (of at least seven artists at the moment) have been mostly focusing on: research of collectiveness within one project; interaction process as an artistic statement; supremacy of the experiment over its outcome. In their most recent project The School of Active Drawing and Performative Posing regular studying practice turns into an experiment in plastic choreography. Having started in the front yard of the Academy of Fine Arts, where Leonid Tskhe is a teacher, the project has expanded much further – to the yard of the Saint Petersburg gallery Lyuda (where North-7 used to have their studio), moving on to Name Gallery and even to the revamped Ovcharenko Gallery.

Here lots of newly generated techniques (like drawing with a hatchet) overlap with the strategy of working and engaging with dubious actors, involved or uninvolved into artistic process (such as random people on the street, etc.). Combining elements of festivity, relational aesthetic, participatory art and modernist approach, the School drops some still relevant questions about the balance between the figurative and non-figurative, the dynamic and the static, gesture and image.

The School of Active Drawing and Performative Posing, 2018