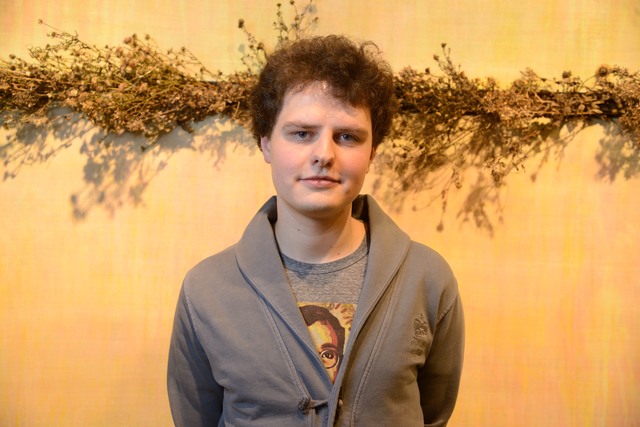 Ivan Novikov (born in 1990 in Moscow) has graduated from the Surikov State Academic Art Institute and the Baza Contemporary Art Institute. He started with installations embracing relational aesthetics, which problematised existence of art in the capitalistic world, but soon turned to painting, which he considered as object of the reverse mimemis, that is not imitating nature, but emerging from it. At the Umwelt exhibition (Komnata Gallery, 2013), abstract paintings were supplemented with plants. Inhabiting the exhibition space they acted not as a decorative background, but as co-authors: the pictorial formal component was dictated by the methods of plant communication. In the Perverted Basket project (Pop/off/art, 2015), painting and nature acquired a political dimension: pictures produced as a result of constant re-painting the canvases and washing tempera away from them (in some cases, the procedure was repeated up to 60 times) were exhibited along with found documentary photographs of Cambodia in the Khmer Rouge dictatorship period and a huge passionflower inside an old ZIL refrigerator released when the Soviet-Cambodian Peace Pact was signed. Thus Novikov affirms painting as something that comes out of nature and belongs to it – linen canvases, wooden frames, natural pigments, and water. Artistic, natural, and political are inseparable from each other.

In the Lien Xo project (2016) dedicated to the Vietnam War and the involvement of the USSR in it, the politics as a subject was clearly interpreted in terms of post-colonialism. Novikov split the space of the Pop/off /art Gallery into two isolated rooms: the upper tier featuring a map of Vietnam and photographs of the military territory shot from the USA aircrafts represented the imperial zone; the lower tier occupied by paintings and quotidian things (like the "Star" balm or instant noodles), on the contrary, referred to the partisan war and the Ho Chi Minh trail. In this project, the artist appeared as the one engaged in the past and at the same time emerging from it: the exhibition presented a series of black-and-white photographs telling the story of Novikov’s parents who worked in Vietnam and met each other in the city of Hue. Since then, Hue has appeared as the second city of residence in the Novikov CV, and the topic of migration has been evident in many of his projects (Sincerely Yours, 2017). For Novikov, a figure of migrant is embodying the object & subject of the current political situation, of natural and social flows which are so tightly intertwined that the influences between them cannot be clearly defined. His exhibition Luggage without Action (Electrozavod Gallery, 2017) presented Novikov’s not quite successful experiments in calligraphy, a Scandinavian-style Japanese hanger, a Japanese encyclopaedia about the Russian army with almost erotic pictures of female soldiers, fruits of tropical plants, a video from the Jewish cemetery in Hong Kong – all joined by the author himself, the artist, who having refused from detailed explanatory labels was narrating the story behind the project. This gesture explicitly expressed a paradoxical idea of the pluralistic present and of the object-oriented world, and at the same time of the even more intensified feeling of being the Other; of the simultaneous mix of cultures and impenetrability of the experience of the Other.