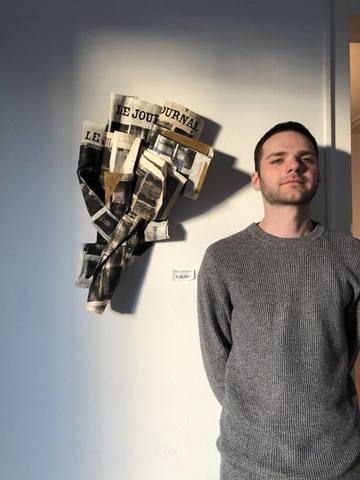 Ian Ginsburg’s artistic practice is a remarkable example of actualization of the archival impulse, important for the international art context of recent years. Ginsburg’s method combines the experience of material production with the procedure of simulationistic deconstruction: by entering into a dialogue with a particular artist, investigating the mode of their existence and the everyday context of their practice, the author makes the process of artistic production visible and demonstrates the manipulative power of images.

The meeting with Joseph Ginsburg, a neglected semi-mythical nonconformist, was fateful for Ian Ginsburg’s newest projects. Having sheltered Joseph in his room in a communal apartment, he began a thorough work to preserve the heritage of the author, who had fallen out of the mainstream artistic narrative, and became his disciple and heir. In the first exhibition dedicated to the Soviet artist (“Mechanical Beetle”, 2017) Joseph Ginsburg still serves as a side note, a misfit deconstructing the figure of Ilya Kabakov. Such inequitable interchange between the Soviet artists questions the authorship phenomenon, reveals the environment of artistic power formation and uncovers the link between price and value. “The Room of Genius. Aphorisms of Joseph Ginsburg” (2018) pays significantly more attention to the latter, although “Kabakov” is also present, scattered in the many Soviet writers with whom Ginzburg corresponded. “The Room” is a freely reconstructed small accommodation in a special warehouse where the artist stored his possessions. Part of them indeed belonged to Ginsburg, part is a creative addition of his heir, who provided post-mortal life for his “adoptive father” with his conceptualisating efforts.

Ian’s projects line up in consecutive and fantasmatic archive processing, which being surprisingly detailed and deep, becomes increasingly mocking and subversive. The exhibition “SOVPIS” (Russian acronym for a “Soviet writer”, 2019) is a reflection on Joseph’s own conceptual project: he sent copies of his book of aphorisms to Soviet writes, critics and publishers and then published it with reviews. Together with the works of caricaturist artist Joseph Igin (the Ginsburg’s real surname), the literature archive of the Soviet nonconformist was assembled into absurd installations and kitschy-type setting in the “queer-communist” style; Ginsburg himself describes it as “Bakhtin’s laughter at the archive”. In such a way the artist updates the investigations of artistic production models of the past century: on the one hand, openly exploiting the strategies of conceptualism, and on the other, turning them against that dominating role which conceptualism plays in the hall of artistic fame.