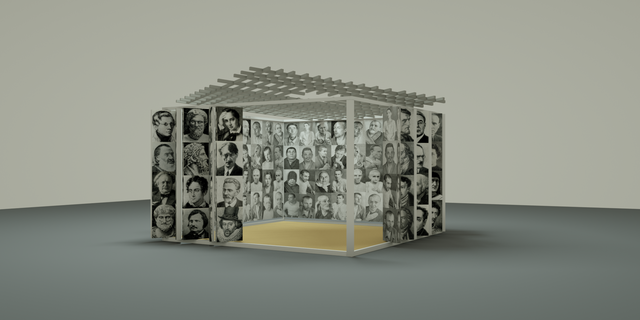 “Room of Geniuses” is part of a memorial and exhibition project dedicated to the forgotten non-conformist artist Joseph Ginsburg (1937 – 2015).
Joseph Ginsburg made a significant contribution to the samizdat culture in the 1970s in Moscow, distributing prohibited literature and homemade Yiddish dictionaries. The mid-1970s and early 1980s he spent in a mental hospital: Joseph Ginsburg became a victim of punitive psychiatry, having suffered for his dissident and Zionist activities.
While in a psychiatric hospital, Ginsburg was engaged in art using children's notebooks for his records and drawings. It was then when Ginsburg turned to the technique of automatic writing. The artist would make a drawing with his eyes closed, then refined the piece removing extra lines and adding schematic facial feautures in the forms of dots and squiggles. In an interview of 2015, Ginsburg recalled his idea from that period which suggested building a room foor treatment and creative inspiration: its walls should be covered with portraits of great thinkers thus enhance a creative potential of a person there.

“Room of Geniuses” is an imaginary chamber with its walls folding in a manner of a folding  screen and 144 portraits of insane people placed inside. The portraits are taken from one of Joseph Ginsburg’s favorite books – a compilation album by professor Sukharebsky, who had studied psychopathology and its impact on human facial expressions.