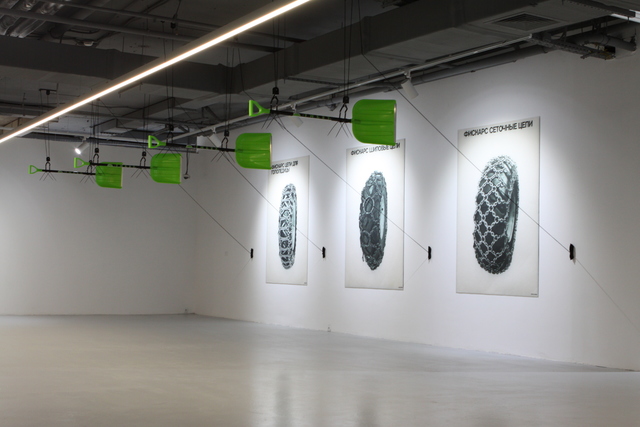 The installation consists of four shovels on bicycle suspensions raised almost to the ceiling and three printed images of tire chains. The latter are taken from the Fiskars presentation made at the exhibition of the Soviet Import / Export of Industrial Goods in the early 1970s. Identical shovels are placed in between the images of the tires and installed perpendicular to the wall, thus leading to the problem of the Duchamp readymade.

The work serves as a conceptual scheme represeting a relationship betweens two types of objects – of the non-conformist art, on the one hand, and of the conformist art, on the other. "Shovels", which by their shape resemble a banner and are installed like a readymade, stand against conformist bulldozer wheels, which are printed on a carpet fabric and are hung on a wall. A schematic, formal confrontation of these two types of objects illustrates a historical event of 1971, the so-called “Bulldozer Exhibition”, which revealed a key problem of the Soviet culture at that time, that is the relations between the official and unofficial art in the USSR.